Winter doldrums are in full effect, seems the kettle is always on these days. After a glorious Autumn, my batteries were pretty well charged up for the cold months, but I must admit, the cold and grey is getting to me.
Nothing much to do but dress warm and soldier on! The nice weather will be here sooner than you think and unit’s good to be a step ahead of everyone else when it does finally arrive in earnest.

There is still plenty to do and be done in the garden. Certainly, it’s a great time to plan. I find myself plotting on where to move the Dahlias this year for maximum view from everywhere on my property. Fortunately I have many of them and they will be everywhere.

It’s also great time to cut back the grasses; they were some what charming in December , but now they are frightful! It’s good to clean up the berry brambles as well as the melted bits of the evergreen plants.

Surely, there is  still some seasonal wreckage from Autumn and Winter that could move along. I often leave some debris in my garden through the Winter to help insulate the soil and the roots, at least that is what I keep telling myself.

Still a good time to prune fruit trees before they begin their growth cycle for the year. Not only are they still sleeping and do not seem to notice, the bare branches provide a great view of the tree’s overall growth pattern.

Winter is ideal for transplanting, ideally if you can get out between rain storms. We’ve seen some very heavy rains in Portland this year. I recommend staying inside while that is happening and waiting for the earth to solidify again before moving plants. Not only is it easier and more fun to do, he soil structure stays in place better allowing the plants a better chance to acclimate.

…Put the kettle on and read something good

Well, of course I wish it were Spring time already, but it’s coming soon and there are plenty of things to do.
The end of Winter is a great time to make some tea and get out there to work on the structural things that there never seems enough time for in the Spring and Summer.

Take some time to browse seed catalogs and map out your garden plan. I am currently searching for a mating pair of Rubinette apple trees. Rubinette (aka M26) is a cross between Cox’s Orange Pippin and Golden Delicious and is the best apple I’ve ever eaten. Good ole M26 is not a good keeper, but who needs apples that taste like cardboard and storage? 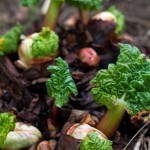 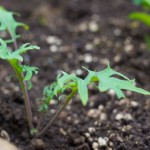 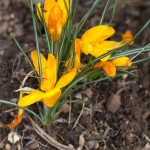 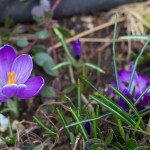 Rhubarb is starting to do it’s thing. Such a strange color to see bursting from dormancy on a grey day. It’s always an encouraging sign.

As Winter ends and Spring approaches, greens do well and give hope to the kitchen gardener. Kales, Brocoli, Spinach, Chard and the like.

Now that plants have returned to life, you can begin feeding perennials and preparing soil with nutrients such as compost and lime to sweeten the soil. Ah, Summertime moving into Autumn. This is a favorite time of year for me. The fruits are bountiful and the earth is still warm.
I am still enjoying Tomatoes from the garden but looking ahead to clearing out the riff-raff and getting things tidy for Winter.

I am enjoying the Dahlias this year… again!
I’ve included some of my favorites.

Garlic bulbs and Onion sets are becoming available as well as the weather beginning to favor Kales, Broccoli and such.
The days and nights are still warm enough to germinate Carrots, Chard, Beets. 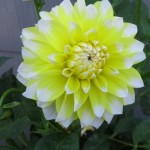 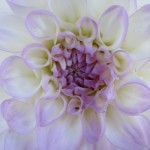 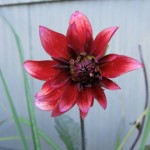 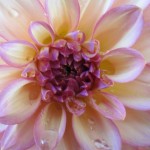 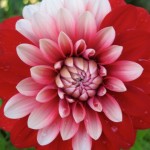 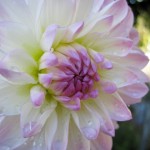 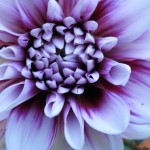 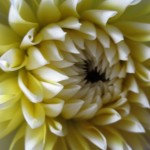 Autumn Rains Last Until Those Of Spring

These are the times that try the gardeners soul. Every once and a while, I’ll peer through the blinds or open the door and decide I’d rather stay dry. I’d like to be out rooting around and tending to the greens and such, but I’m more likely to sit inside and read about it. I’ve been drinking tea and reading a fine book called Fifty Plants that Changed the Course of History. I recommend it!

Still, there’s always something to do out there. Late Winter and early Spring are excellent times for transplanting. New little weeds sprout up, mostly Cress and Fireweed. I like them well enough, as far as weeds go. They are certainly better than other weeds that might appear in their absence and I think it’s better to have something in the soil than nothing at all.

February is a great time to gather your seeds together, make new garden beds, amend soils (add lime, etc.) and plan what to grow and where.

Keep in mind general sunshine patterns in your yard to optimise growth cycles. Many plants will be ready to germinate in the weeks to come. Of course, the hot sun plants will need a more hospitable climate to grow.

Lloop “Autumn Rains Last Until Those Of Spring”